Assalamualaikum ustaz. What is the ruling on eating hyenas? I heard that it was used to be sold between the hills of Safa and Marwah. Hope for an explanation. Thank you.

Alhamdulillah, praise and gratitude to Allah SWT for His countless blessings for us all. Praise and salutations to our beloved Prophet Muhammad PBUH, his family, companions, and all those who follow his footsteps until the Final day.

We begin with the statement of Allah SWT:

“And He has subjected to you whatever is in the heavens and whatever is on the earth – all from Him. Indeed, in that are signs for a people who give thought.” [1]

The above verse shows that Allah SWT has subjected everything that is in the heavens that consisting of the sun, moon, and stars as well as everything on the earth that consists of animals (for food and transportation), plants, ships and others to benefit us all. All these blessings are from only Allah, He grants these matters to you as blessings and His gifts. Hence, only to Him, you should worship (obey) and never associate anything with Him. Indeed, what He has subjected for you are signs and proof which shows His Oneness, for those who reflect on the verses of Allah (signs of His Greatness) and arguments as well as proofs that they learn from. [2]

Hyenas or also known as hyenas are mammals that are famous for their strange howls like the hilarious people who are attacked by hysteria. Hyenas hunt animals for their food. It also eats the remains of animal carcasses. [3] Meanwhile, according to the 4th Edition of Kamus Dewan, a hyena is a wild animal that eats carcasses. [4] The World Encyclopedia has also given a similar definition of this hyena. [5]

In addition, hyenas are animals that love to dig graves due to their strong desire for human flesh. When he saw a man sleeping, he would make a hole under the man’s head, and pounce on his neck. Then he killed the man and drank his blood. It is a despicable animal; no other animal behaves like it except its kind. Hyenas are also considered stupid animals among the Arab community as the Arabic proverb says:

“Dumber than a hyena.”

Habitat of hyenas and their food

The Hyena family consists of four species in three genera. Spotted hyenas are the most common species found in wildlife; while the species of aardwolf hyenas, striped hyenas and brown hyenas are difficult to find due to their small size, and their habit of going out at night and living alone. [7] Briefly, it is as follows: [8]

Brown hyenas are found south of the Zambezi River, in southern Africa. The hair on his back is long. His coarse fur was blackish grey with stripes only on his legs. Brown hyenas have a habit of going out at night, and a habit of living alone, as well as being able to walk 25 to 40 kilometres each night in search of food. They live in a small clan consisting of several females, males and baby hyenas.

Although Brown Hyenas are mostly carrion eaters, they are also active in hunting and eating a type of furry seal along the Namibian coast. In more barren areas, Brown Hyena also eat plants such as Tsama (Citrullus lanatus) and gemsbok cucumbers (Acathosicyos naudinianus). 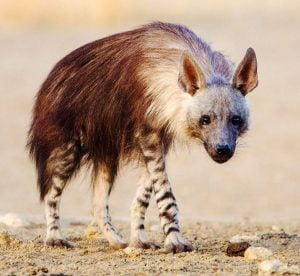 Spotted hyenas live in areas dominated by female hyenas consisting of hyenas that are in contact with each other. Male hyenas migrate and become nomads, breeding when meeting with nearby groups. The spotted hyena is known for its nature of eating the carcasses of animals hunted by lions, but it is also active in hunting prey the size of a zebra. However, it is not known whether it also feeds on plants.

Aardwolf, on the other hand, is an unusual hyena, which lives in the plains of southern and eastern Africa. It’s not a wolf, but a hyena. It is brown with black stripes, black legs and a thick black hairy tail at the tip. Most hyenas have strong jaws and teeth, but aardwolf teeth are small, weak and cone-shaped. It has a wide and sticky tongue. It has five toes on its front foot and four toes on its back foot. Its size is also smaller than other hyenas. Along his back, there are thick feathers, which he will uphold so that it looks bigger. It can also roar and roar when frightened. The name aardwolf which in Afrikaans means ground wolf is given to this animal because it lives in a hole in the ground. Aardwolf is rarely seen because it only comes out at night.

The aardwolf type hyena is a unique hyena, which has adapted to a special nutritional characteristic, which is to eat plant termites. Termites of this type have a habit of doing activities at night, and this makes it the best opportunity for the aardwolf to find food.

Sometimes, it eats animals such as rats, rotting carcasses and even eggs. Aardwolf prefers to live in dry open areas with short grass, especially in areas of farmland that have dried and hardened. 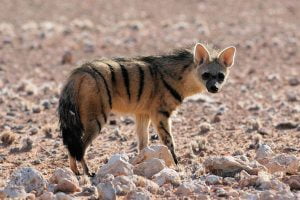 Striped hyenas live in northern Africa and from Turkey throughout the Middle East to India. It is smaller than a speckled hyena. The fur is grey with black stripes on the body and legs. The Striped Hyena is the fastest-growing hyena. They prefer thick bushes, arid lands and mountains with low trees as well as areas filled with shrubs and thorny trees. The Striped Hyena only comes out at night, and it is the animal that most likes to live alone. Yet it has been seen in small family groups while hunting for food.

Although this type of hyena is mostly a carcass eater, it also actively hunts and eats flying insects, and animals such as small rats, and birds and also catches large-sized prey such as Cape rabbits (Lepuscapensis) and bat-eared foxes (Otocyonmegalotis). Like the War Hive, the Striped Hive also sometimes eats fruits, especially the fruit of mulberry (Balanites sp.). 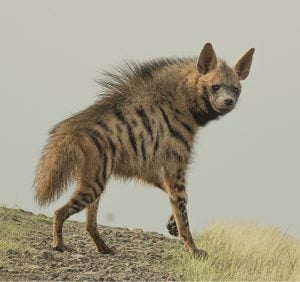 The ruling of eating hyena

Abu Hanifah stated that hyena is prohibited to be beaten. This is also the opinion of Sa‘id bin al-Musayyib and al-Thauri. They argued that hyenas are animals that have fangs and the Prophet PBUH prohibited us from eating any animal that has fangs. [13]

Likewise, al-Zaila’I al-Hanafi stated in his book, that a hyena is an animal where its meat isn’t eaten for it eats carcasses and its meat is foul-smelling due to its diet. Thus, it is included as bad animals – filthy. [14] Allah SWT states:

While Imam al-Nawawi said that hyena meat is permissible to be eaten and traded. [16] This matter is also stated by Imam al-Syafi’I in his book:

“Hyena meat was sold between the hills of Safa and Marwah when we were in Mecca. And I don’t know of anyone in our ashab that differed in the opinion that ruled it permissible.” [17]

They argued by presenting the narration of Ibn Abi Ammar who asked Jabir:

Moreover, there is another hadith from Jabir bin Abdullah, he said:

“I asked the Messenger of Allah (ﷺ) about the hyena. He replied: It is game, and if one who is wearing ihram (pilgrim’s robe) hunts it, he should give a sheep as atonement.” [20]

The above hadith is clear evidence that shows us that hyena is halal to be eaten, for it is categorized as an animal that is hunted.

Moreover, Kamaluddin al-Damiri al-Syafi‘I also stated that among the evidences that rule it is permissible to eat hyena is because hyena doesn’t eat any food that is infected with infectious disease and can live without using their fangs – which means they can survive without hunting other animals. [21]

Furthermore, Syeikh Daud al-Fatani has listed the hyena as a land animal that is halal to be eaten. [22] However, hyenas meant here are those that have fangs but don’t usually hunt other animals because there are other types of hyenas that have fangs and hunt. [23]

In addition, Imam al-Nawawi also included the names of scholars who hold the opinion that hyena meat is permissible to be eaten. Among them are Imam Ahmad, Daud, Ibn Abi Talib, Ishaq bin Rahuyah, and Abu Thaur as well as numerous other companions and tabiin. [24] Whereas there are others among the companions that permit eating hyena and say that it is a game animal such as Sa‘ad bin Abu Waqqas, Ali bin Abu Talib, Ibn Umar and others.[25]

The reason fanged animals are prohibited except hyena

Basically, the Prophet PBUH prohibited eating any fanged wild animal. This is based on a narration from Abu Tha’labah:

“The Messenger of Allah(ﷺ) prohibited the eating of every beast of prey with fang,” [26]

Imam al-Syafi’I further explained this matter by saying that fanged animals that are prohibited to be eaten are animals that hunt their food with their fangs. [27]

Furthermore, Ibn Qayyim al-Jauziyyah explains that an animal is prohibited to be eaten when it fulfils two of these characteristics; it has fangs and is a natural predator such as a lion, wolves and tiger. As for hyenas, they only fulfil one of the two characteristics. However, they aren’t natural predators – don’t hunt other prey as their food – and undoubtedly, fanged animals are more specific compared to just fanged animals. Predators are prohibited to be eaten due to their vicious hunting character. It is also undeniable that the vicious nature when hunting that wolves, lions and tigers share isn’t present in hyenas that one couldn’t state both are similar in terms of their prohibition. Furthermore, hyenas aren’t considered predators lexically or the normal local norm. [29]

Therefore, it is likely that the species of hyena in question is Aardwolf because it is the only hyena whose teeth are weak and not strong. While striped and brown hyenas, we can classify these two species as omnivorous animals because, in addition to eating carcasses, they also eat plants and fruits. In addition, both species are also actively hunting other animals for food. So, it is likely that the only edible hyenas of these two species are those that eat carcasses and plants or fruits and do not hunt other animals as their food. While spotted hyena is not included at all because his natural habit is to hunt and have strong fangs.

According to the above discussion and arguments, in our opinion, it is permissible to eat hyena meat as stated by the majority of scholars such as Imam Ahmad, Daud, Ishaq bin Rahuyah, Abu Thaur, Imam al-Syafi‘i, Imam Nawawi and others. Likewise, the same is stated by other scholars such as Sa‘ad bin Abu Waqqas, Ali bin Abu Talib, Ibn Umar and others.

However, it isn’t clearly stated the type or species of hyenas. But there are scholars who said that hyenas meant here are the ones with fangs but their fangs are weak and they don’t naturally hunt other animals as their main diet. This is as expaliend by Ibn Qayyim al-Jauziyyah in his book, I‘lam al-Muwaqqi‘in.

May Allah SWT grant us all a clear understanding in religion. Amin.